The Delicious Torment, from Alison Tyler, the Mistress of Literary S/M 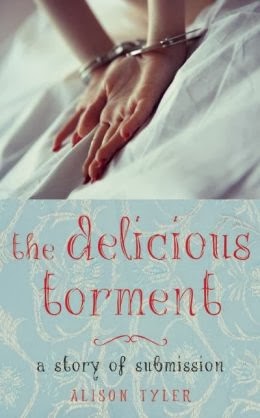 And there’s never a dull moment. Here’s what happens after Sam counters Jack’s suspicious surveillance with tricks of her own, then waits at home for him:

I was on the bed, naked, and I’d cuffed my ankles and tossed the keys to the corner of the room, clicked the cuffs onto my wrists, and hung the chain from the hook on the wall. I was as exposed as I could possibly be. And deeply grateful that it was Jack in the room and not Alex. I didn’t know if I could have handled this reveal twice.

Then, when things are reconciled, at least for the time being, comes this scene:

Jack stroked me all over with his bare hands. Up and down. Not leaving any part of my body untouched. I’m trained as a masseuse, and yet I’m one of those strange creatures who don’t like to be massaged. In fact, if I don’t know someone well, I don’t like to be touched at all. I don’t hug people on greeting. I don’t spontaneously hold hands with my friends. I have a history of being stand- offish in this way.
And yet...
When Jack used his bare hands to stroke from the tops of my shoulders down to my feet, he made me purr like a relaxed panther. My body was humming, electrified. He didn’t tickle me. He didn’t touch me too gently. He used firm strokes, over and over, until I felt as if I were flying.
Only then, after he’d put me into an almost hypnotic trance of pleasure, did he bend close on the bed, press his face near the nape of my neck, and say, “You worried me.”
He’d lulled me, tricked me, created this false sense of
safeness in my surroundings, and now that was replaced by instant awareness. My skin prickled. My muscles tightened.
“On purpose,” Jack continued.
His breath warmed the back of my neck, but I would not turn my head to look at him. I was frightened of what I might see in his cold blue eyes.
“I told you before,” he continued in a menacing whisper. “I told you not to make me worry.”
Oh, I’d been so pleased with my plan. And it had worked exactly how I’d hoped. But should I have confronted Jack in a different way? Spoken to him like an adult rather than playing behind his back? No... He understood this. He understood dirty pool. Christ, he was a lawyer after all. But that didn’t mean I could get away free. Jack had to take back the power. And that meant I would endure the punishment he chose.
I could feel Jack’s body against mine, pressing hard. He was still dressed, which made me feel more naked than ever. He straddled my body from behind, so that I could feel how hard he was, and I knew that I’d turned him on. He was like steel. Even when I’d made him worry, I’d managed to turn him on. We had a powerful connection, a type that rarely exists. You can meet people who will spank you. You can meet people who will tie you up, who will fuck you six ways to Sunday. But this was different.