Ah, December! It seems strange to be longing for December on the first of July, even though the temperature today in Western Massachusetts has been just about 100 degrees, but that’s not the only reason to look forward about five months. The main reason is that Best Lesbian Erotica of the Year Volume 3 will come out on December 12th.

I like to share the introductions to my anthologies and the Tables of Contents well ahead of publication, but not usually this far ahead. In this case, though, as I keep rearranging the fans for maximum effect and hoping that my antiquated air conditioner doesn’t quit, the thought of December is so appealing that I’m going to pretend it’s almost here, and dive right in. 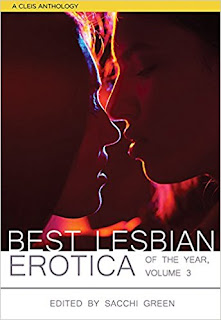 We open a book hoping to be taken somewhere—to faraway places, into the lives and inner thoughts of intriguing characters, or into times past or even unexplored depths of ourselves. If the book is classed as erotica, we also expect to be intensely stirred both sensually and emotionally.

The beauty of an anthology is that we can expect to be taken in multiple directions, and meet an assortment of characters with a wide range of viewpoints. The drawback is that with short stories we often wish for more time with these characters, these sensations, these adventures. But writers with a special gift for short fiction can still draw us deeply into the brief length of their work, with multidimensional characters, vivid settings, intriguing story arcs, and, of course, sex as intrinsic to the story as any setting.

I’ve been lucky enough in two previous volumes of this series to be the editor who gets to read the flood of submissions and decide which of the best, in my opinion, should be included. I could never fit all of the very best into the limited space of a single anthology, so I try for a balance, and as wide a variety of themes and styles as possible, especially those I haven’t seen before. Originality is high on my wish list.

Here are some hints as to where the stories I chose will take you, and what you may find there. Could there be a better start than the fantasy-fulfillment story, “Ninjutsu,” set on a plane high above the Pacific en route from Tokyo to Honolulu? And what could feel more real than longtime lovers waking in the “Morning Fog” of San Francisco? How about touring the South of France in “Perfume,” a massage in a Moroccan public bath in “Fuck Me Like a Canadian,” a cabin “Where There’s Smoke” in the snowy North Country, and the surveillance area above the ceiling of a Las Vegas casino where “Oliver: Twisted” begins?

New York City figures in at least three stories, playing different roles. In “The Auction,” the city is an artsy background for socialite fundraisers. In “Trying Submission,” it’s an upscale background for a decidedly non-upscale character. And the Harlem of 1931 in “Sweet of My Heart” is the home of a Peace Mission’s free
meals where even a dance hall girl could be fed.

While most of the stories have contemporary settings, two more are set, at least partially, in the past. If you’re old enough to have been swept up in the rock and blues bands frenzy of the ’60s and ’70s, you may catch the significance of September 1970, and even if you aren’t that old, you’ll find out in “Jani-Lyn’s Dragon.” And in “Still Marching,” old friends who met and parted twentyfive years ago at a march for abortion rights in Washington, DC, bump into each other at a present-day march in Philadelphia.

There are various themes included in the anthology. I had quite a few submissions featuring coffeehouse encounters, but “Husher” is the one I chose for its deft and evocative style. There were also several submissions involving cancer, something I hadn’t seen before, and others referring to trauma from past abuse; I went with “Fearless,” which included both, along with a beautifully uplifting conclusion. Of the several stories I received featuring differently abled or neuro-atypical characters, I settled on “Trying Submission,” with a vulnerable character who lingers vividly in my mind.

On another tack, “The Night Shift” proves to be just the-right time for accidental phone sex. Then the familiar professor/former student theme of “Rules” travels in unexpected directions and gets as steamily entertaining as they come, while the queer bookstore in “Rainbow’s End” provides an ideal place for a hesitant would-be writer to find just what she hardly dared hope for. And in the beautifully balanced “Yin and Yang,” a contemporary ballet dancer and her lighting-technician lover make the perfect team, while the writing, alternating between lyrical and straightforward, makes the perfect presentation of their story.

Yes, all of these stories include hot, intense sex, in its many-splendored manifestations. I’ll leave you to discover those, scene by scene. A word of caution: you may not get jet lag from this journey, but a suitable recovery period between stories is highly recommended. Trust me.

Now for the important part, the Contents:

Don’t get me wrong, I’m not really all that anxious for winter to come. My tomato plants are thriving, my pole beans are beginning to climb their poles, and my summer squash plants are getting frighteningly lush, although there are no blossoms yet. I want everything summer can offer. But I could do with temperatures just a bit lower than the ones this week.