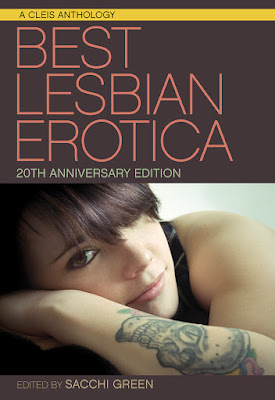 BLE 16 is all firmed up, and I'm fired up! Here's the official list of stories and authors, and my introduction, to give you a sense of what's coming out next February for your bedtime reading delight (or stealthy commuter train pleasure.)

Readings are planned for New York City, a pre-publication event on December 17th in Kathleen Warnock's spoken-word series Drunken, Careening Writers at the KGB Bar, and a post-publication celebration on February 26th at Bluestockings Books, both in the East Village. More readings are in the planning stage.

I'll post a cover image as soon as I have an official one.

About the Authors
About the Editor

The Best Lesbian Erotica series has a special place in my heart. Twenty years ago, in 1996, Tristan Taormino and Cleis Press published the first volume of Best Lesbian Erotica, and in 1999, to my amazement, my own very first erotica story made it into that year's anthology. When Tristan Taormino called and said that she loved my piece because it was so different, I was hooked on the series and the entire genre for good. (Tristan also very kindly pointed out the many improvements I needed to make, of course; I had a lot to learn.) Seven more of my stories made it into further editions of Best Lesbian Erotica, although I got a bit distracted in recent years with editing ten themed anthologies of lesbian erotica myself, eight of them for Cleis Press. Editing this one feels like the greatest honor of all.

Back in 1996 there were far fewer markets for well-written lesbian erotica than there are now, but there were many majorly talented writers with the courage and the burning desire to tell the stories demanding to be told, stories that can still stir your senses and linger in your mind. There have been some changes in erotica over the years, largely in how far we dare to go and how much we think we can get away with, but I still remember stories from those earlier years as challenging as any written today.

The main difference these days is in the quantity of lesbian erotica available, and the numbers of people writing it well. For this 2016 edition (the title, Best Lesbian Erotica of the Year, has changed just a bit, but it’s still the same series) there was a superabundance of excellent work, and choosing was a harrowing as well as stimulating experience. Tastes differ, of course, especially when it comes to erotic preferences, so not every story will push every reader’s buttons, but for me the writers here make this edition outstandingly worthy of Best Lesbian Erotica’s long tradition of sexy excellence.
In the limited space of a single anthology, “best” has to take into account factors beyond any single measurement of quality. An apples and oranges comparison just won’t cut it; envision instead, say, peaches…smooth, rosy, rounded peaches…and pears…and maybe the occasional heavy melon… But don’t worry. No actual fruit metaphors are abused in this book.

Originality takes many forms. D. L. King melds the familiar tropes of werewolves and lesbian auto mechanics into a character as likable as she is sexy. Megan McFerren’s characters take refuge in a London bomb shelter during WWII. Emily L. Byrne’s brilliant incarnation of Miss Scarlet seduces a police detective in the NYC subway system. Louise Blaydon’s “nice girl” and “bad girl” strike sparks together forming a band on the gritty side of Liverpool in 1961. There are stories with touches of humor, or moments of tenderness, or immersions in the no-holds-barred depths of bondage and the keen pleasures of pain—and now and then all three at once.

What you get, in this anthology, is a seemingly infinite variety of lesbian erotic desires, in all the heat, beauty and power of both our darkness and our light. I’m immeasurably grateful to all these writers who crafted their stories as only each one of them could, and offered them to be included here.
From me, from the writers, and, I hope, from many of you readers; Happy Twentieth Birthday, Best Lesbian Erotica of the Year! Birthday spankings may be in order, but be gentle with your paperbacks. With e-books—well, maybe you’d better find a surrogate spankee. Just read a few of these stories with her to warm things up.