A Starred Review on Library Journal!

Best Lesbian Erotica: 20th Anniversary Edition. Cleis. Feb. 2016. 224p. ed. by Sacchi Green. ISBN 9781627781541. pap. $16.95. EROTICA This 20th anniversary edition of the series soars with 17 powerful f/f offerings that stand out from the crowd. Edited by Green, the anthology entails plenty of sexy first-time hookups, peppered with established couples and their raunchy routines. Rose de Fer’s “Dust” packs poetic grit and sensuality into lonely Alice’s otherworldly encounter with a beautiful hitchhiking stranger, while young couple Jesse and Asher explore their voracious sexual appetites and Jesse’s nascent dominant side in Sinclair Sexsmith’s piping hot “Luscious and Wild.” Other highlights include Jean Roberta’s eccentric “Tears from Heaven,” in which Dr. Athena Chalkdust lavishes young submissive protégé Didrick Bent with pain and pleasure after an incident of animal neglect. In “Mirror, Mirror,” Frankie Grayson’s protagonist finds dormant carnal pleasures awoken by the voyeuristic tendencies of her alluring look-alike. D.L. King doesn’t disappoint with “Hot Blood,” a sexy supernatural vignette in which gruff mechanic Van spots a potential packmate in a gorgeous redhead whose car breaks down, while Anna Watson’s playful “Easy” recounts a woman with a unique “talent” for finding an electric current in even the slightest of sensations, culminating in her orgasmic experience during a drag king performance. VERDICT The powerful stories range widely in content, kink, plot, and pairings but are uni- form in their high quality and ability to craft engaging erotic tales with few words. 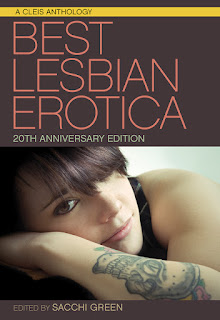 Posted by Sacchi Green at 9:19 AM No comments:

Goodreads Giveaway for Thunder of War

Giveaway ends December 31, 2015.
See the giveaway details at Goodreads.
Enter Giveaway
Go ahead, this Giveaway lasts until December 31.  This is one of the best anthologies I've edited, with fine writers. The stories in no way glorify war, but rather pay tribute to the women of courage and vulnerability, passion and strength, who did what they thought needed to be done, in their own personal ways, and took what comfort they could in other women doing the same.
Posted by Sacchi Green at 11:15 AM 1 comment: