Playing with Food, Paying for Food 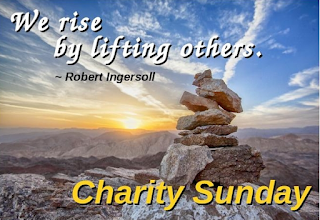 Oxfam is my chosen charity this time, which is where “Paying for Food” comes in. I missed “World Food Day” (October 14th) by a couple of weeks, but extreme hunger is still the lot of millions of people, and Oxfam is one of the major charities fighting it. I will donate $1 to them for each hit on this blog, and $2 for each comment, in the next two weeks.

"Playing with Food" might seem obscene, when so many are so hungry. My only food-themed story scenes, though, seem to present eating as a fun kind of foreplay, so I guess you’ll have to put up with that. I’m not at all sure that I haven’t posted from this story before, but here you go anyway, with an excerpt from “Crème Brulée,” originally published in the anthology All You Can Eat. A Buffet of Lesbian Erotica and Romance, edited by R.G. Emanuelle and Andi Marquette.

“Hey Rory, somebody’s asking for you. Knows your name.”

I saw the sly grin on Audrey’s face, saved my spreadsheet and quit Excel. “I don’t think it’s a complaint,” she called to my retreating back.

I wasn’t focusing on the accounts anyway, just daydreaming. Remembering someone I’d never see again, didn’t want to see, because I’d never be able to resist her. The only person in years who could melt me inside the shell I’d constructed so carefully, and break right on through it. Just that one night, around this time last year…

And there was Raf, in the very solid flesh, seated in the same alcove overlooking the salt marsh. I felt her magnetism all the way across the dining room. Last year I’d bribed Audrey to let me wait on that table; this time I didn’t even bother to snatch her order pad.

The broad back, the granite-gray hair clipped short, could have belonged to any of thousands of guys vacationing on Cape Cod--or hundreds of women, this close to Provincetown. But I knew exactly who it was. Knew every line and curve and hollow of the body beneath the slate-blue jacket and white shirt, not to mention the gray slacks. I’d explored all of her well enough to make sketches from memory, and to chisel and polish her image out of pink Cadillac Mountain granite from Maine.

“Good evening,” I said, demurely, just as I had the first time. “I’m Rory. I’ll be serving you tonight.”

Raf kept her gaze on the menu spread out across the white tablecloth, but her mouth twitched and then expanded into a wide grin. “I’ll have my usual,” she said, and lifted those clear hazel eyes to me. I could barely keep my own lips steady.

“Two appetizers to share? Wellfleet oysters on the half-shell and ceviche of Chatham scallops?” I looked pointedly at the empty chair across from her. A year ago it had been nicely filled indeed by a voluptuous young thing trying to obey her dyke Daddy’s instructions to eat the raw shellfish whether she wanted to or not. I’d taken pity and told the girl that the lime juice in the ceviche more or less “cooks” the scallops. “And two entrées, the bouillabaisse and the cioppino? With the house White Zinfandel, black coffee, no dessert?” I’d be damned if I’d ask about the girl. What was her name? Juliana?

“Actually, I was kind of looking forward to dessert.”

My blood had been simmering. Now it came to a slow boil, remembering how we’d gone at each other like starving wildcats in my studio at 2 AM when Juliana was safely asleep at their motel, exhausted after an evening of clubbing in Provincetown.

“But for the rest,” Raf went on, “just one appetizer and entrée, unless I can get you to share with me. Would your boss allow that?”

“I’m the boss tonight. Technically, the assistant manager.” Which didn’t guarantee that I’d get away with it. Audrey could be bribed, but there were six other waitresses, already intensely interested in what I was up to. Tough. It wouldn’t be easy to replace an assistant manager who also did the accounting. Not this late in the season. “And as the boss, I happen to know that the duck in beach plum-Cabernet sauce is especially good tonight. I’ll go for the oysters, but duck instead of bouillabaisse.” Raf already knew that I’m far from the submissive type, but the emphasis on choosing my own meal wouldn’t hurt.

I caught Audrey’s eye and motioned her to the table to take our order. Then I swept the room with a steely gaze that got the rest of the waitresses hustling the way they were supposed to.

“I went by your studio and the gallery,” Raf said, as soon as we’d been supplied with ice water and lemon slices. “I was hoping you’d be there, covered in clay dust like you were last summer.”

Daddy and girl had wandered from the co-op gallery into my studio, clearly looking for a corner just secluded enough to pretend no one could see them making out. The girl's shorts had been so brief they revealed rosy traces of the proprietary bar-code Daddy's hand had imprinted on her naughty ass. They must have indulged in a bit of after-lunch action before taking a stroll through the galleries.

Juliana had pouted when they’d seen me there, but Raf had chatted, admired my stone and porcelain nudes, stroked a tempting set of smooth marble buttocks, and probed a big finger down between the irresistible thighs. My crotch got wet enough to dampen the clay dust layering my jeans. When they turned up later at the restaurant where I work to earn the minimal living that art can’t provide, it felt like the truck that had hit me had stopped to take me for a ride.

The way Raf looked at me now in my conservative pants suit made me sure she was thinking more of how I’d looked later that night covered in nothing at all. Just the way I was remembering her.

“I’ve been working more in stone than clay since then. Still get covered in dust, though.”

“I noticed some of your new sculptures, there and in that fancier gallery up the hill.” She hesitated. “That piece in the pink-speckled stone…with the ‘Not for Sale’ sign…” Her sun-ruddy face got a little redder. She would never have seen herself from the angle I’d portrayed; rear view, recumbent, quarter-scale, with smooth flesh emerging out of a jagged granite base. Broad shoulders, the side-swell of a breast, head turned to the right, just a few details of face and brush-cut hair…the effect was on the verge of being abstract, but clearly inspired by a real person. And she knew it.

‘That’s brought me a couple of commissions,” I said, with studied casualness. “Thanks for the inspiration. Who’d have thought anyone rich enough to afford it would want a stylized portrait of her lover in stone? Maybe I’ll be able to make a living with my art one of these days after all.”

The oysters arrived just in time to save Raf from having to figure out what to say. I enjoyed the hell out of her discombobulation. Let her wonder whether I’d been using her for my own artistic purposes rather than succumbing to pure lust.

But then I blurted out, “I’ll never sell that one.” So much for staying cool and detached.

“I’m glad.” Raf plucked an oyster on its half-shell from the bed of ice chips and raised it toward me like a salute before tilting the sweet juice into her mouth. I did the same. We managed a simultaneous sliding of the oysters themselves across our tongues and down our throats, swallowing in perfect synchronization, then licking our lips. And grinning.

“The sauce is worth trying, too.” I spooned a bit of chipotle mignonette onto another oyster, then licked it slowly off before sucking the slippery morsel into my mouth.

“Mm.” Raf tried it, even more dramatic in her licking and sucking. “Not bad, but not the very best sauce I’ve ever tasted.”

A sound at my shoulder like stifled laughter erupted into a snort. Audrey, bringing the scallops ceviche in their little avocado boat. I pretended not to have heard. As soon as she left Raf raised a questioning eyebrow and jerked her head in the direction of Audrey’s sashaying butt.

I shook my head. “Audrey’s a good kid in her way, but a one trick pony, and that trick is getting her posterior paddled by any means necessary. Once in a while I’ll indulge her, but I make her earn it. Last time you were here that’s how I bribed her to let me wait on your table. There’s nothing more between us.”

We finished off the last two oysters sedately, though we were close to laughter, before turning to the contrast of tender scallops tangy with lime and jalapeńo and the buttery luxury of perfectly ripened avocado. I could almost forget the memory of young Juliana sampling the same dish with a high degree of suspicion.

Raf must have thought of Juliana, too, or maybe she read my mind. “Funny how much better food tastes when you’re with someone who really knows how to enjoy it.”

I still wouldn’t ask about the girl. “Maybe we should have ordered lobster, too, for the full Tom Jones effect.”

”That’s exactly it! When I said something along those lines to Juliana, she had no idea what I was talking about. Never heard of Tom Jones the movie, much less the book, or even the singer who lifted the name.”

“Ah, youth,” I said. “Just the same, she’s certainly a tasty bit of arm candy for a stroll around Provincetown.”

Past tense. So my first unasked question was answered.

And then the second. “We outgrew each other.  At least I outgrew her, and she transferred to a West Coast college.” She shrugged. “It was about time.”

The intensity in her hazel eyes as she watched for my reaction was my cue to ask what it was time for now. A second frantic, earth-shaking fuck with me, and then on to the next sweet young morsel who wanted to act out fantasies of submission with the biggest, baddest gray-fox butch around? The fuck I would make sure of. The rest I’d just as soon skip.

(That’s it for now, but trust me. Nothing gets skipped, especially créme brulèe on Race Point Beach by moonlight.)

One of these days I may expand the whole story and combine it with its prequel, Sunset, Sunrise, published in a collection of my work, A Ride to Remember, from Lethe Press. That is currently out of print, but I think the Audible format is still available.)

For links to this month’s other Charity bloggers, check Lisabet Sarai’s website, https://lisabetsarai.blogspot.com. Lisabet is the creator of Charity Sunday.