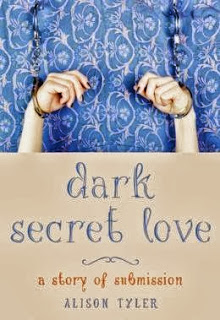 Trust me, you want to read Dark Secret Love.

Nothing can describe this book as well as Alison’s own words, and she’s given us a wonderful excerpt that I’ve posted below, but humor me for a few minutes while I discuss some of my own reactions.
As the story unfolds, I was especially struck by the way Alison’s alter-ego, Samantha, had her own personal take on submission. Her need for pain with sex had less to do with the usual endorphins or amorphous sense of guilt, and more to do with finding her own core ability to endure, “take it,” even refuse to use a safe word. For her, submission expressed a secret strength, not a weakness. And, having already known so long just what she wanted from a man, her real moment of revelation came in this passage:
“I need this, too,” Jack told me. And everything changed. By taking care of me, he was taking care of himself. I don’t think I’d ever tried to envision the situation from a Dom’s point of view before.”

In the Blake poem that supplies this book’s title, the line before “dark secret love” includes the phrase “crimson joy.” The sequel to Dark Secret Love, coming out very soon now, has the fine title The Delicious Torment, but I find myself hoping that someday Alison will use the title Crimson Joy for a book. It would be great for a collection or anthology of spanking stories, but even better for another Alison Tyler novel.

And now, at last, over to Alison Tyler herself.

You know what you want.
Whether you’re wired to desire sweet nothings or crave the harsh caress of a Dom’s whip—you know what you want. I often write stories about characters suddenly coming to terms with this realization. People who have muddled through their adult relationships, not understanding the true pleasure waiting around the corner, or down that back alley. I get great satisfaction writing this type of story.
But my story was different. I knew what I wanted, and I couldn’t find the man to give it to me. Well, I did at first. But not at second. My second major relationship was so soul-crushing that I almost gave up. I don’t mean gave up looking. I mean gave up everything. I couldn’t have been more subdued.
So when I finally met a man who had no fear of my desires, I didn’t just awaken. I ignited.

Connor didn’t say another word, didn’t give me another chance, he moved with feline grace, grabbing me and pulling me over his lap, into a slightly altered position from the one he’d initially requested. I lowered my head, tears of shame already stinging my eyes. Not because he was going to punish me over his lap, but because I’d already failed him, failed to follow a simple command. He dropped the belt and started with his hand, smacking his palm against the semi-sheer fabric of my brand new nightie. I held myself as still as possible, emotion flooding through me, trying to behave for Connor as I’d tried for Byron. I’d made Byron my dom. He hadn’t given me anything I wanted, but I had supplicated myself for him, suffocated myself for him, perhaps somewhere in the deep recesses of my brain hoping that he’d ultimately reward me if I were good enough.
Hadn’t I learned anything from Brock? With the right man in charge, I would never be good enough. That was the whole point. Connor taught me that little lesson again, his strong hand carefully slipping the golden fabric to my hips, then dragging my panties down my thighs. He used his open palm again and again, and soon thoughts stopped as the flush of pain took over. But still, I didn’t struggle. I didn’t make a sound. Which told Connor quickly enough that he had to work me more seriously. He didn’t want my silence. He wanted to know that the spanking was having a proper effect. Only when my skin was cherry-flushed to his satisfaction, did he push me back onto the bed and tell me to lock my hands together over my head. I licked my bottom lip, then bit into it as I saw him double his belt, before making the leather snap.
I felt as if I’d been underwater for three years. Felt as if for the first time in ages, I could finally breathe. Connor set his hand against my cheek. He bent down and kissed me, and then stood back and let the belt meet my ass for the first time. The sound of the belt was more intense than the first stripe. That whip-crack of leather through silence, then the intake of my breath, and the admonishment of Connor to “stay still, Sam. Don’t move. Don’t move an inch. You’ve got a long fucking night ahead of you. And you know it, too. Because you deserve this. Don’tcha? Don’t you deserve this?” It was a crooning question, almost singsong, making fun of me somehow, teasing me.
When I didn’t speak right away, he was on me as Brock had been. Always answer a direct question. Don’t forget this. Learn from my mistakes. His hand tilting my chin up towards him, his eyes flashing a look I’d never seen in their striking blue before.
And suddenly I understood. He wasn’t punishing me because I wanted it, because I touched myself at night and dreamed of him being rough with me. He was doing this because for four months I had flirted with him, had kissed him, had fucked him, and then gone back home to someone else. He had never asked me to leave Byron, had rarely mentioned the man’s name at all. But he had known that I kept my clothes lined neatly next to Byron’s in the closet. That I ate breakfast each morning at his table, when I could stomach a bite. That I spent weekends with his family.
I hadn’t been unfaithful to Byron. I had cheated on Connor.

Alison Tyler is the author of Dark Secret Love and the soon-to-be-published sequel The Delicious Torment (both from Cleis Press). She is the editor of anthologies for Plume, Harlequin, and Cleis. Visit alisontyler.blogspot.com for updates, reviews, and the occasional picture of boots.

Posted by Sacchi Green at 2:30 AM No comments:


My writers deserve every word of it.