Through the Hourglass: Lesbian Historical Romance 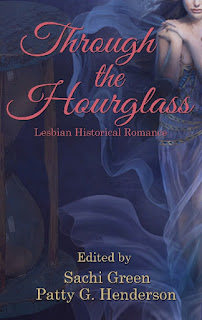 Check Women and Words (http://womenwords.org ) on December 3rd for a chance to win a free copy—if you can stand to wait that long. These terrific writers really delivered.

Here are the introductions and the list of stories to give you some idea of what you’ll find.

Patty G. Henderson We live in a harsh world. Technology rules and love is sometimes born and nurtured via an iPad, iPhone, or social media sites. Where is the romance? Lesbian fiction has its share of erotica anthologies, where passions, sex, and lust take center stage over tender romance. I yearned to see an anthology that captured those days gone by, where romance was sometimes slow and tender, but seething with passion beneath the velvet, satin, and proper restraint. I approached Liz McMullen with an idea to do an anthology honoring lesbian historical romance. It would be a first, and we would travel through history, telling tales of lesbian romance like the sands through an hourglass. I was honored that Liz wanted to see those stories too. And I do hope that readers who take the trip back in time to sneak a peek at lesbian love in the distant or exotic past or in not-so-distant times will be left all the more enriched and entertained.

Sacchi Green Through the Hourglass has been very much a group effort, so both Patty G. Henderson and I want to share our thoughts here, and publisher Liz McMullen will outline the charity aspect at the heart of our project. What could be more appropriate for an anthology focusing on historical stories of lesbians than helping organizations that benefit senior lesbians right now?

History, to my mind, is the greatest story ever told—or too often left untold. Women loving women have been a fact of life for as long as love and women have existed. Who's to say some of those sculptors of full-bodied stone or ivory goddesses weren't women? We have always been here, in every era and every area of society, even though our stories have so seldom been told.

Fiction has its own power to deepen and intensify our perceptions and beliefs. Stories that show lesbians in well-researched historical settings, with passions fully recognizable today, rescue our past from invisibility and affirm our place through all time, past, present and future.

The writers here are, of course, the real hearts and souls and inventive minds of Through the Hourglass, and their stories speak for themselves. We begin in the Old World with Megan McFerren’s “Völvur”, set in the Iceland of the 990s where the old Nordic beliefs have not yet given way to the newly arrived Christian missionaries, and girls called Wand-bearers still run free as messengers between the worlds.

Six hundred years later, in the mid-1500s, Heather Rose Jones’s “Where My Heart Goes” takes us to the Renaissance, where a woman’s royal privilege is offset by being a pawn of political intrigue and succession, but her heart is still her own to give, however long it takes.

By 1692-93 in the New World, we find the brutal misogyny of the Salem Witch Trials pitted against the unbreakable bond between two women in Patty G. Henderson’s “In Full Moon Light”. Then, two centuries later during the War Between the States, in “Emma” by Priscilla Rhoades, a young woman passing as a man finds love in an unexpected setting before inevitably taking on the duties of a soldier. Meanwhile in Europe, also during the 1860s, Susan Smith’s “Saffron and Fennel” depicts an aristocratic widow taking on a man’s role in order to pursue archaeological exploration, and, with the scientifically trained daughter of a botanist at her side (and in her bed), discovering traces of women loving women as long ago as the early Cretan civilization. Just twenty years later, the characters in Cara Patterson’s “Propriety” struggle, with tenderness and wit, against class distinctions and the obligations of an Austrian Archduchess.

Back across the sea after half a century, in 1910, Doreen Perrine’s “A Year of Silent Promise” paints a complex scene of art and longing and the roughly beautiful coast of New England. Just a few years later, The Great War changes the world forever, and by 1917, an ambulance driver wounded in body and spirit by trench warfare in France encounters a free-spirited artist in England at “The Bridge” by Connie Wilkins. “Captain My Captain” by Lexy Walleans takes us forward four years to the postwar England of 1921 and another seacoast, where recovery and loss and memories of adolescent games of piracy affect the lives of childhood friends.

The between-wars era of prohibition in the USA forms the colorful backdrop in 1928 to “The Rum Runner and the Show Girl” by R.G. Emanuelle, followed by a cluster of stories sparked by the drama of WWII. Jean Copeland’s “Nightingale” portrays the struggling nightclub scene on the home front, while MJ Williamz’s “My Elizabeth” depicts women like Rosie the Riveter building war planes, and Aliisa Percival’s “With a Spark” varies the theme with a celebrity visiting a Canadian bomb-building factory for a patriotic fund-raiser. Just a year later, in 1944, the characters in Allison Fradkin’s “With Ball Due Respect” pitch witty banter and score with each other as team members in the All-American Girls Professional Baseball League.

The post-war decades bring us to times so recent that some of us remember them, and those who don’t know someone who does, but they still belong to the history that formed who we are today. Ann Bannon’s Beebo Brinker is an icon of lesbian literature, and here we have an excerpt from her book with all the grit and moody tension of Greenwich Village in 1962. Lee Lynch’s stories, too, have inspired us for years and continue to illuminate our world, and her evocative story “Honeydew Moon” is the perfect conclusion to our anthology, with an older, established couple in the 1980s sharing their memories of romance and struggle during the 1950s with young lesbians just beginning their adult lives.

All these wonderful stories, with their passion, adventure, variety, and attention to historical details, have come together because of Patty G. Henderson’s original proposal.

From Publisher Liz McMullen A portion of the proceeds for Through the Hourglass will go to these charities that directly serve LGBT senior citizens: Services & Advocacy for GLBT Elders (SAGE) and The Gay & Lesbian Association of Retiring Persons, Inc. (GLARP). SAGE works to achieve a high quality of life for LGBT older adults, supports and advocates for their rights, fosters a greater understanding of aging in all communities, and promotes positive images of LGBT life in later years. Learn more about their mission and services by visiting their website: www.sageusa.org The Gay & Lesbian Association of Retiring Persons, Inc. (GLARP) is a non-profit corporation formed in 1996 by co-founders Mary Thorndal and Veronica St. Claire to call attention to the aging issues in the GLBT community. They are currently working on creating a retirement community for LGBT seniors. Visit their website to learn more about the organization and their mission: gaylesbianretiring.org/site.
Posted by Sacchi Green at 8:32 PM No comments: